From Kiyomizu-dera Temple to Nijo Castle 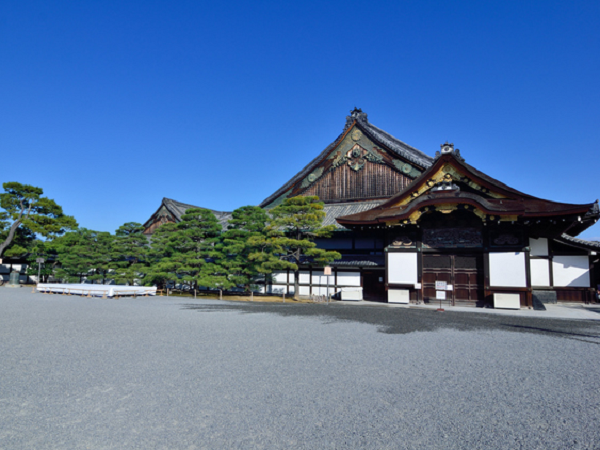 How to get to Nijo Castle from Kiyomizu Temple ?

There is no direct bus service available between them.

The map below is the overview of the routes, stops, time and fare. 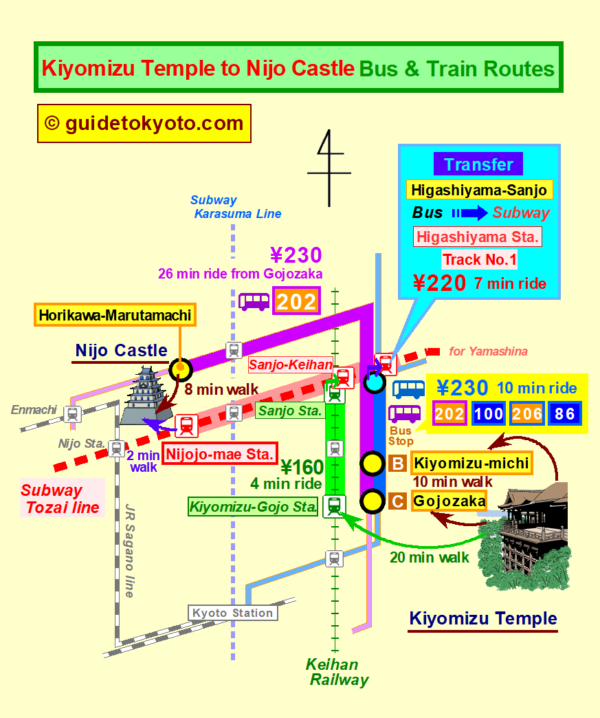 From Kiyomizu Temple, there are 2 nearest bus stops, Gojozaka and Kiyomizu-michi.

Fromt these bus stops to Nijo Castle, there is no direct bus service available.

But, if you don’t mind walking, Kyoto City Bus  No.202  directly take you to one stop north, Horikawa-Marutamachi bus stop (8 minutes’ walk to Nijo Castle) from those two bus stops near Kiyomizu Temple.

Or, if you transfer for Kyoto City Subway (Tozai line) on the way, you don’ t need to walk so mach.
And, much more bus services available from Gojozaka or Kiyomizu-michi bus stop.

On peak season such as cherry blossom or autumn leaves, by only trains (Keihan Railway & City Subway) is better because buses are often delay due to heavy traffic jam and congestion of passengers.

Bus fare is ¥230 and Subway fare is ¥220 for the sections per ride.
(When you transfer from buses to subway trains, the fare is discounted∗ ¥60 autmatically if you pay by IC Cards) ∗This discount ends March 31, 2023.

These 3 routes have pros and cons.
So, please choose your way, comparing specific examples of times and fares below.

Actually, how long & how much does it take from Kiyomizu Temple to Nijo Castle after all ?

It takes at least 50 to 55 minutes including walking & wating time (¥230).
Firstly, you need 10 minutes’ walk to Kiyomizu-michi or Gojozaka bus stop.
Bus No.202 are operated almost every 14 minutes. (Note : not so many bus services)
From the arrival Horikawa-Marutamachi bus stop, it takes about 8 minutes’ walk to the Castle.

It takes in total about 40 minutes including walking & transfer time. (¥450 or ¥390 if IC card).
Also, firstly head for Kiyomizu-michi or Gojozaka bus stop.
Buses (No.100, 202, 206, 86) & Subway trains are operated a lot.
Please transfer for Subway Tozai line at Higashiyama-Sanjo bus stop, (3 miutes to subway Higashiyama station).
From the arrival subway Nijojo-mae station to Nijo Castle, it takes about 2 minutes’ walk.
If you have Subway & Bus Pass, this route is recommened.

Please note that those buses are likeiy to take much more time on peak season because of heavy traffic jam.
So, on peak season such as cherry blossom and autumn leaves, the only trains route below is recommended.

It takes in total about 45 to 50 minutes including walking & transfer time (¥380).
From Kiyomizu Temple to Keihan Kiyomizu-Gojo station, it takes about 20 minutes’ walk.
Keihan trains are operated every 10 minutes, and Subway trains are operated a lot.
Please transfer at Keihan Railway Sanjo station for subway Sanjo-Keihan station (2 miutes).
From the arrival Subway station, it takes about 2 minutes’ walk.
Although you need more walk than other routes, you can move on time even on peak season. 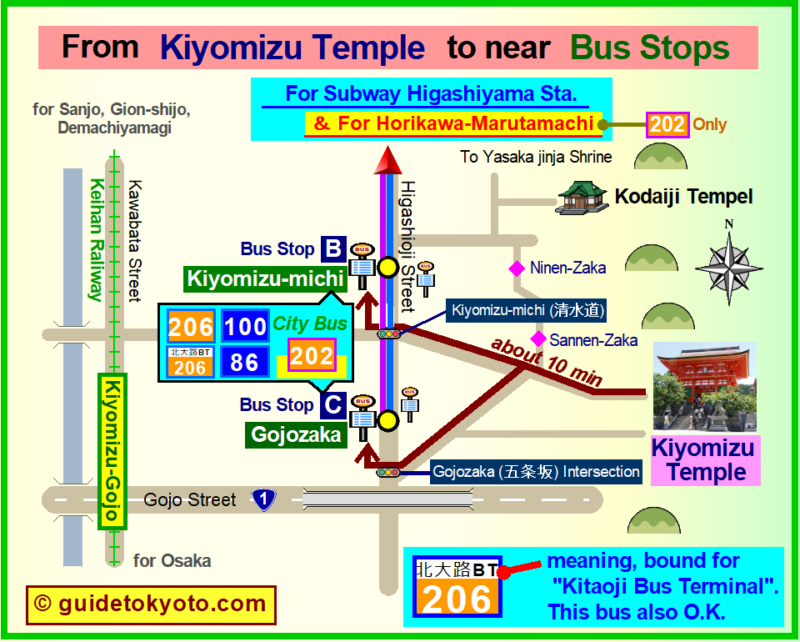 It takes about 10 minutes’ walk to both of the bus stops. 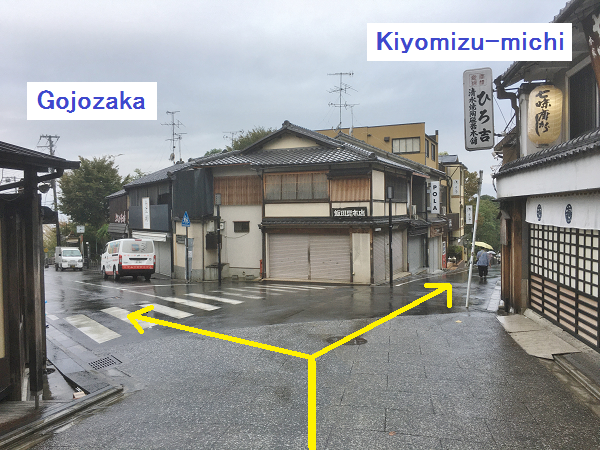 The following sections are the details of those 3 routes. 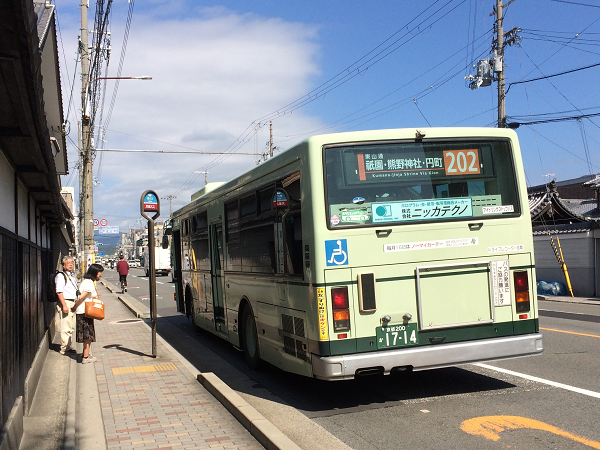 From Kiyomizu temple to Nijo Castle (by bus  No.202  plus walk from Horikawa-Marutamachi bus stop), it takes in total at least 50 to 55 minutes including average waiting and walking time.

Bus  No.202  for Nijo Castle departs from Gojozaka bus stop C or Kiyomizu-michi bus stop B.

Usually, either bus stop is fine, but, on peak season such as cherry blossom or autumn leaves, Gojozaka bus stop is better because buses are likely to be full of passengers when arrive at Kiyomizu-michi bus stop.

This Bus  No.202  doesn’t go to the nearest bus stop to Nijo Castle (Nijojo-mae bus stop), so you need about 8 minutes’ walk from Horikawa-Marutamachi bus stop. 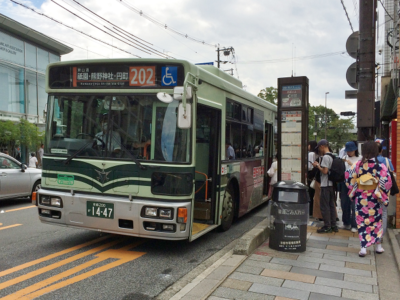 After getting out of Kiyomizu Temple, walk downhill street in 10 minutes until you come to Higashioji Street.
Gojozaka bus stop C and Kiyomizu-michi bus stop B are located at west side of the Higashioji Street.
(Please refer to the map in the previous section)

2. Get off at Horikawa-Marutamachi Bus Stop, and Head for backward Intersection 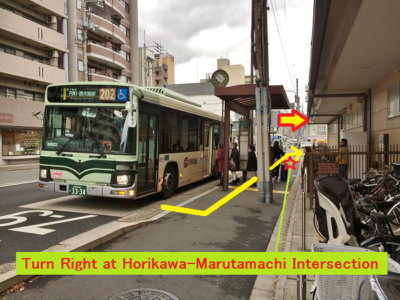 After getting off, walk backward direction, and head for the intersection ahead (Horikawa-Marutamachi intersection, meaning Marutamachi St. and Horikawa St. cross).

At the intersection, turn right and keep walking straight along the street.
(Now, you are on the Horikawa street) 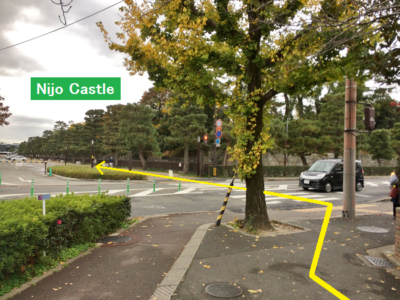 At the next intersection, keep walking straight along the stone wall of the Nijo Castle. 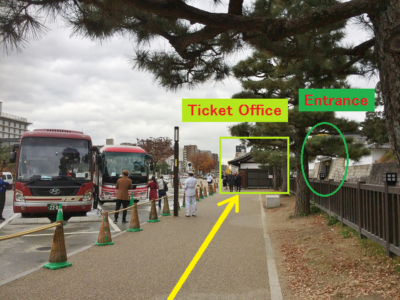 In about 8 minutes’ walk from Horikawa-Marutamachi bus stop, you come to the ticket office of the castle.

Main entrance is over the ticket office.

The map below shows the ways from Horikawa-Marutamachi bus stop and also from the nearest Subway Nijojo-mae station exit to Nijo Castle. 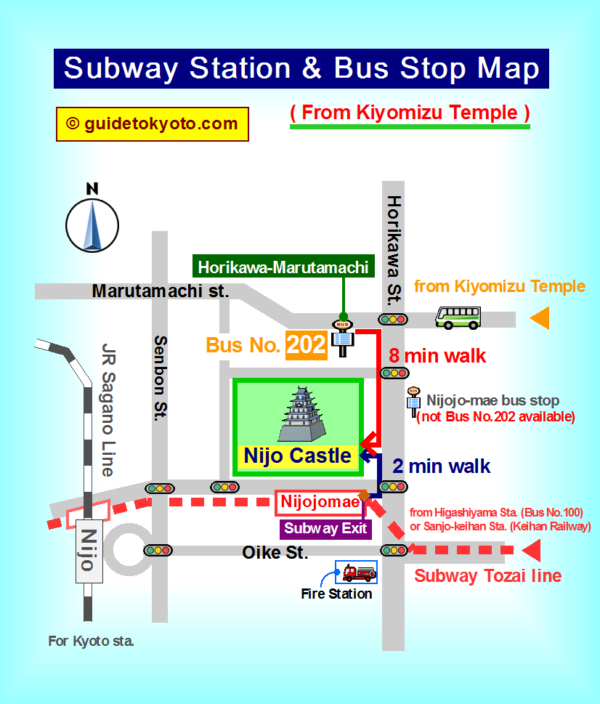 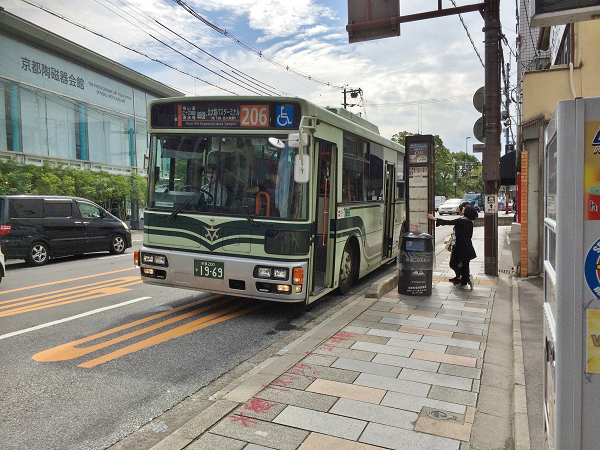 To go by Bus + Subway from Kiyomizu Temple to Nijo castle, it takes about 40 minutes in total, including walking and average wating time.

The followings are the details. 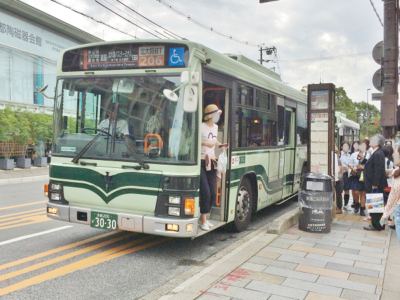 Please head for the same bus stops (Gojozaka bus stop C and Kiyomizu-michi bus stop B) as bus No.202 for Horikawa-Marutamachi.

From Kiyomizu Temple, it takes about 10 minutes’ walk. (Please refer to the map in the first section)

Bus  No.100  is called one of  “Raku Bus“, meaning special bus for visitors to go sightseeing in Kyoto easily. (Attention! Bus No.100 are currently out of service for an undetermined period.)

2. Get off at Higashiyama-Sanjo bus stop, and Transfer for Subway Tozai line. 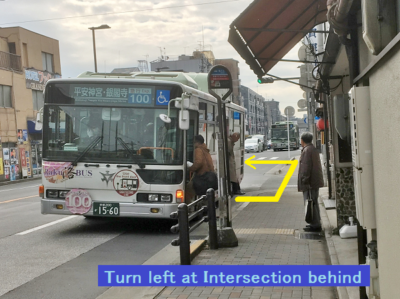 In at least 7 to 10 minutes’ ride from Gojozaka or Kiyomizu-michi bus stop, buses arrive at Higashiyama-Sanjo bus stop.

After getting off, walk backward direction, and head for Subway Higashiyama Station Entrance No.2. 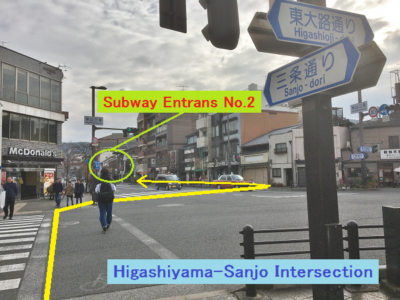 Subway entrance No.2 is located at south-east side of Higashiyama-Sanjo Intersection (meaning Higashioji St. and Sanjo St. cross), diagnally across from bus stop you just get off.

(Only if you take bus No.86, just cross Higashioji street) 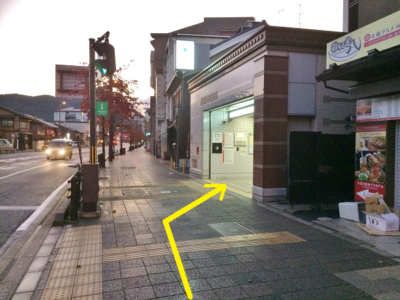 This is the Subway Higashiyama Station Entrance No.2.

3. Take any Subway Trains at Track No.1. 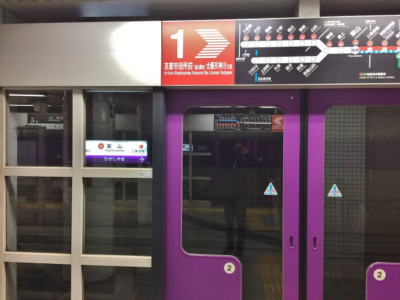 Trains are operated a lot, more than 10 times per hour in the daytime.

4. Get off at Nijojo-mae Station 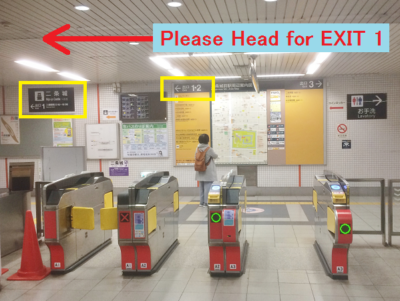 After getting out of the ticket gate, please head for Exit 1. 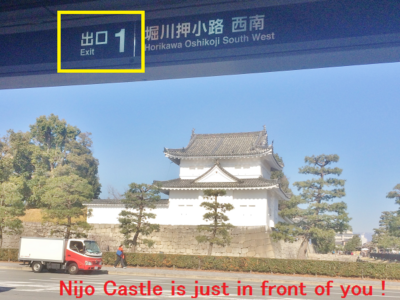 From the Exit 1, you can see Nijo Castle just in front of you. 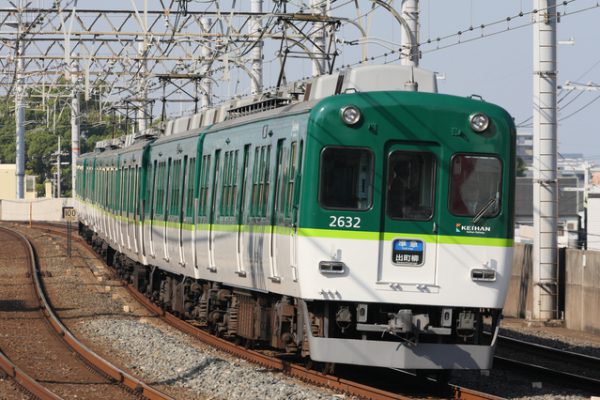 Although you need about 20 minutes’ walk from the temple to the nearest Keihan station, Kiyomizu-Gojo, you can move to Nijo Castle without delay, avoiding congestion even on peak season.

The followings are the details.

1. The way to Kiyomizu-Gojo Sta. from the Kiyomizu Temple 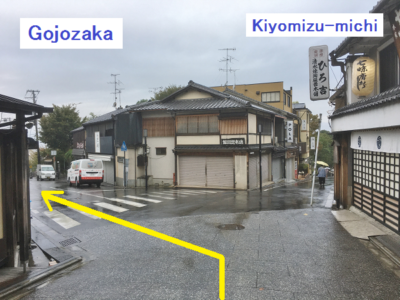 At the place where the street divide in two on the way, walk toward left direction. 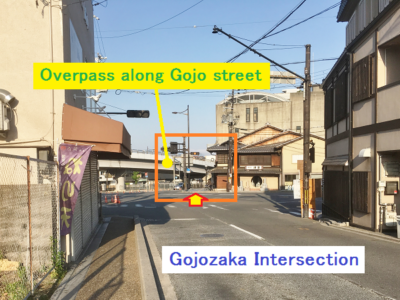 In about 10 minuts’ walk, you come to Gojozaka Intersection.

Please head for the sidewalk along the overpass on the Gojo street. 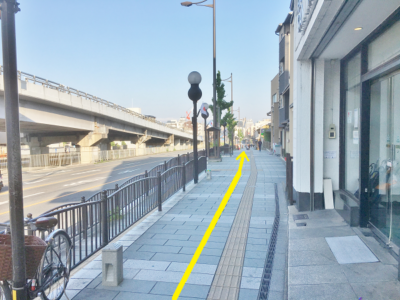 Keep walking along the overpass or Gojo streets until just before a river (about 10 minutes). 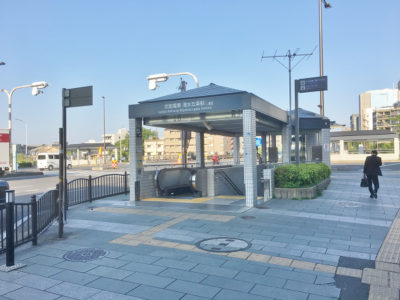 At the intersection just before a river, the entrance of Kiyomizu-Gojo station is located.

The map below shows the way to Kiyomizu-Gojo station from Kiyomizu Temple. 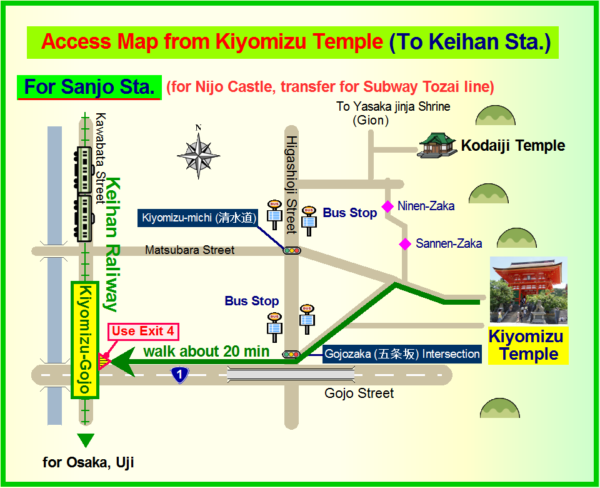 2. Take any Trains at Track No.1, Kiyomizu-Gojo Sta. 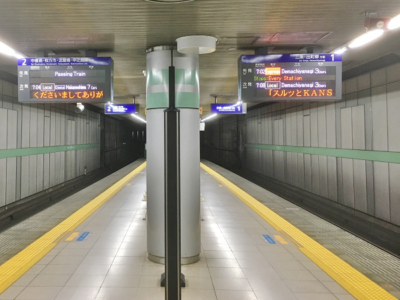 All trains departing from track No. 1 take you to Sanjo station, where you need to tranfer for Subway Tozai line.

Sanjo station is the 2nd stop.

3. Get off at Sanjo Station, and Transfer for Subway. 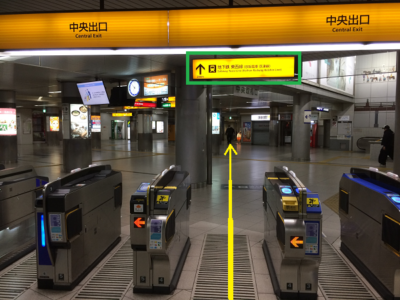 After getting out of ticket gates, please head for Kyoto City Subway ticket gate (Sanjo-Keihan station). 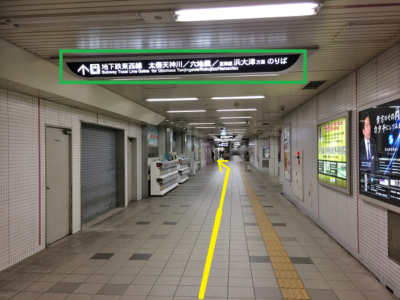 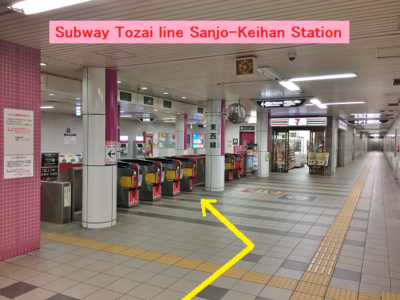 Soon, you come to the ticket gate of Subway Tozai line Sanjo-Keihan station.

4. Take any Subway Trains at Track No.1. 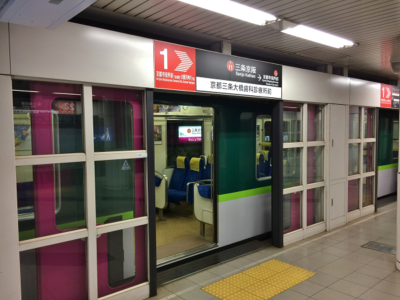 Trains are operated a lot, more than 10 times per hour in the daytime.

From the Nijojo-mae station to Nijo Castle, please refer to the previous section, the same way as I already explained.

at anytime you want to visit